Gertrude Barber's love of learning, coupled with her desire to work with and help others, led her to a career in education. Following her graduation from Villa Maria Academy, she entered a two-year teacher certification program at Edinboro State Teachers College. After receiving her teaching certificate in secondary education in 1931, she hoped to find a teaching position at an Erie high school.

Jobs proved scarce during the heart of the Great Depression, however, and Gertrude could only secure a post as a substitute elementary teacher in the Erie School District. During those two years as a substitute teacher, Gertrude reached an important decision that was to dramatically change her life – and alter the course of disabilities services for generations to come.

1945 – Dr. Barber with an early textbook she wrote for children with disabilities.

Inspired by an assistant Erie school superintendent, who told Gertrude that she didn't have to leave the country to become a missionary – she could do that right in her own community by helping the handicapped – Gertrude decided to commit her life to serving children with physical and intellectual disabilities. In 1933, she became a full-time special education teacher. Soon, she initiated her first change in the system, bringing parents of the children directly and actively into the education process.

After a decade in the classroom, Gertrude decided to take on a new challenge and in 1943 was appointed as the district's home and school visitor. Her responsibilities included telling parents that no services were available for their children, who would either have to be kept at home or sent to a distant institution. "I would have to go to the parents and tell them that their children could not go to school anymore," she recalled. The experience was making an impression on Gertrude that would shape her future.

Gertrude pursued a certificate in psychology and, in 1944, was appointed as the district's assistant psychologist. In this role, she gained experience in student testing, assessment, and placement. She continued her studies at Penn State University and in 1945 was awarded a master's degree in psychology. Gertrude was soon appointed the Coordinator of Special Education for the school district and would remain in this post through 1954. Now in charge of all the district's special education programs, she began the monumental task of pulling school officials, teachers, parents, and students out of what she called "the Dark Ages."

At the time, most school officials regarded handicapped children as beyond help, but Gertrude had a vision of what could be done for the children. Part of her responsibilities involved signing papers for parents who made the agonizing decision to send their child to an out-of-town institution for care and training. Each time a child was uprooted from his or her family, Gertrude said it devastated her. "I knew we had to find a better way," she said. Gertrude believed that all individuals, regardless of their disability, have unique gifts to offer, and have the right to live to their fullest potential. But in the early 1950s, the idea that children with disabilities could be educated and reside in their own communities was largely unheard of.

Bringing together a small group of parents and teachers, Gertrude started a program for children with developmental disabilities in a classroom at the local YWCA in 1952. She continued her work with the Erie School District but spent the rest of her time talking to the community about the growth of services and a need for a permanent site for these programs. 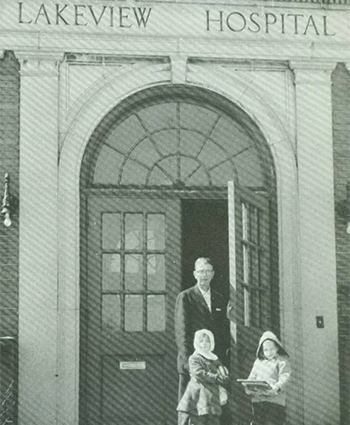 The former Lakeview Hospital in Erie's East Bayfront neighborhood
became the site of the Dr. Gertrude A. Barber Center in 1958.

Shortly after Dr. Jonas Salk developed a vaccine for polio in 1955, the City of Erie no longer had a need for its Lakeview Hospital at 136 East Avenue. On July 1, 1958, City Council approved leasing the former communicable disease hospital to be used as a school for children and a sheltered workshop for teaching vocational skills to adults. "At last, we have a building with enough space to accommodate all of our needs," Dr. Barber said at the time. But she was wrong. With the added space, programs continued to expand to meet emerging needs. In 1962, the Exceptional Children's Center, later to be renamed the Dr. Gertrude A. Barber Center, earned state accreditation for its school programs.

Word of Dr. Barber's work spread throughout the state and the nation, and in 1962 she was appointed to President John Kennedy's White House Task Force on the Education and Rehabilitation of the Mentally Retarded. Together with members such as Ethel Kennedy, she assisted in bringing national attention to the needs of persons with intellectual disabilities.

Rhonda Schember, parent of Jodi
Erie, PA
The Cause For Sainthood
Cause for Sainthood
Announcement: Opening of Cause
Message from the Postulator
Dr. Barber's Life
Overview
The Early Years
Building A Foundation
Continuing the Dream
In Her Words
Supporting The Cause
Testimonials
Video
Written
Share Your Story